Sometime earlier this year Royal Enfield launched a new variant of the oldest motorcycle in continuous production, the Bullet. The Bullet series has been in production in India since 1955 when Redditch company partnered with Madras Motors in India to form ‘Enfield India’ to produce the 350 CC Royal Enfield Bullet.

The Bullet motorcycles have had a very old connection with me, from the times I would wait to hear the thump of my father’s Standard Bullet 350 when he came to pick me up after school to my uncle’s ex-armed forces G2 Bullet which he picked from the army disposal auction at Panagarh.

Last March they launched the Bullet Trials Works Replica 350 & 500 motorcycles in India. The question that popped in my mind, ‘Another Bullet! Why?’ 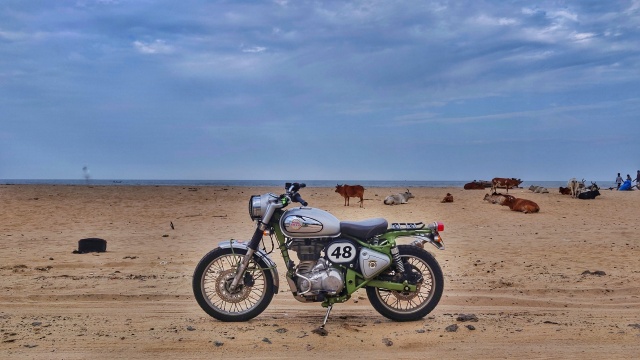 I managed to take a spin on the 500 variant last week and this is what I found. The motorcycle is based on Bullet 500, which essentially means there is no change to the engine. This engine is the tried and tested 499 CC air-cooled fuel injected unit doing its job in the older variants of the Bullet. Oodles of low-end torque from the word go makes it an easy to manage motorcycle, in traffic or trails alike. Yes, trails and Yes, the motorcycle is called the Trials.

Back in 1948, the Trials Bullet was the first production motorcycle to feature a swinging arm suspension. And, the Trials Replica is a homage to the motorcycling legend, Johnny Brittain. He, as a young 18-year-old had great success at the International Six Days’ Trials with the Royal Enfield Factory Team.

The motorcycle has a stripped-down look, with a luggage rack where the pillion seat should have been. Maintaining an old school charm with a dash of bright coloured frames. Functional, with higher handlebars, raised mudguards and knobby tires to make it more capable off-road. An upswept exhaust to tackle deep water crossings without any worry. Though, personally, I would have loved slightly taller handlebars. With all these old-school and functional bits, Royal Enfield also ensured modern dual-channel ABS working in tandem with the block pattern tires to provide all the grip and stopping power you would need across varied terrains. Add to this a bunch of classy accessories to make the motorcycle look butch.

I have said this before and will say this again, Royal Enfield knows how to integrate a bullet motorcycle in your lifestyle. Did we really need another bullet or even a function-specific trials motorcycle? Maybe, Not. But they DO make it desirable. And that is what sets this motorcycle apart, with history and legacy from an armed forces work-horse to a lifestyle statement today and a fabulous service network across the country, Royal Enfield knows how to sell a lifestyle.

← What if a downgrade is ‘the’ upgrade you were looking for?
Health & Immunity in the ‘Work from Home’ Lifestyle →

A train journey after what seems like ages. Fairly empty trains today. I realised I do miss the nothingness of sitting in one, lost in your thoughts while the train chugs along to your destination.
Somedays
Boy, O Boy. It's been ages since I have been to Toit. Just crossing this place built up cravings for the brews from this place. Soon.
Can one, be in LIKE with two, at the same time? Unique motorcycles, these two. Each has a character, I wish the other one had. Sigh!!!
A quick ride early morning to rewire our heads after a long week.
Brilliant capture by @motoslug
One world. One passion. One Ride
Finally the reveal. Probably my first riding jacket which is not black. Featured here is the @royalenfield Nirvik, touring jacket with @d3olab armours, warm inner liner and an outer rain protection layer. I love the fit and how airy this jacket is, once you open the vents. Having already used one during my Sikkim ride, it did what it's meant to through sub zero temperatures, to the sweltering heat of Central India in summers. Well equipped and with lots of pockets for your knick knacks.
Been a while since I visited the high and mighty.
Remembering the rides on the Classic 350 back in the day, this feels like a whole new motorcycle. The 'vibrator' is long gone. Though I do miss the sprung seat of the older generation.
Rain rides are always beautiful, I know a few here who would not agree. 😋
Which color is your favorite?
This variant of the All-New Royal Enfield Classic 350 has my heart. I'm glad that they have retained the Classic looks and did not end up making it too modern. There are upgrades where needed and the old school feel is still intact.
Throttle, Slide, Spin, The Fall
What a brilliant two days at @farmoffthegrid with @soulcleavr @danielliaopdg and @iyengarpayyan
Feel the warmth of the sun like never before. #BeReborn. Visit royalenfield.com/bereborn #RoyalEnfield #RidePure #PureMotorcycling
#BeReborn with a fresh perspective. Visit royalenfield.com/bereborn #RoyalEnfield #RidePure #PureMotorcycling
See the oceans swirl like you've never seen before.
Hear the rustle in the grass. #BeReborn
Feel the rain like never before.